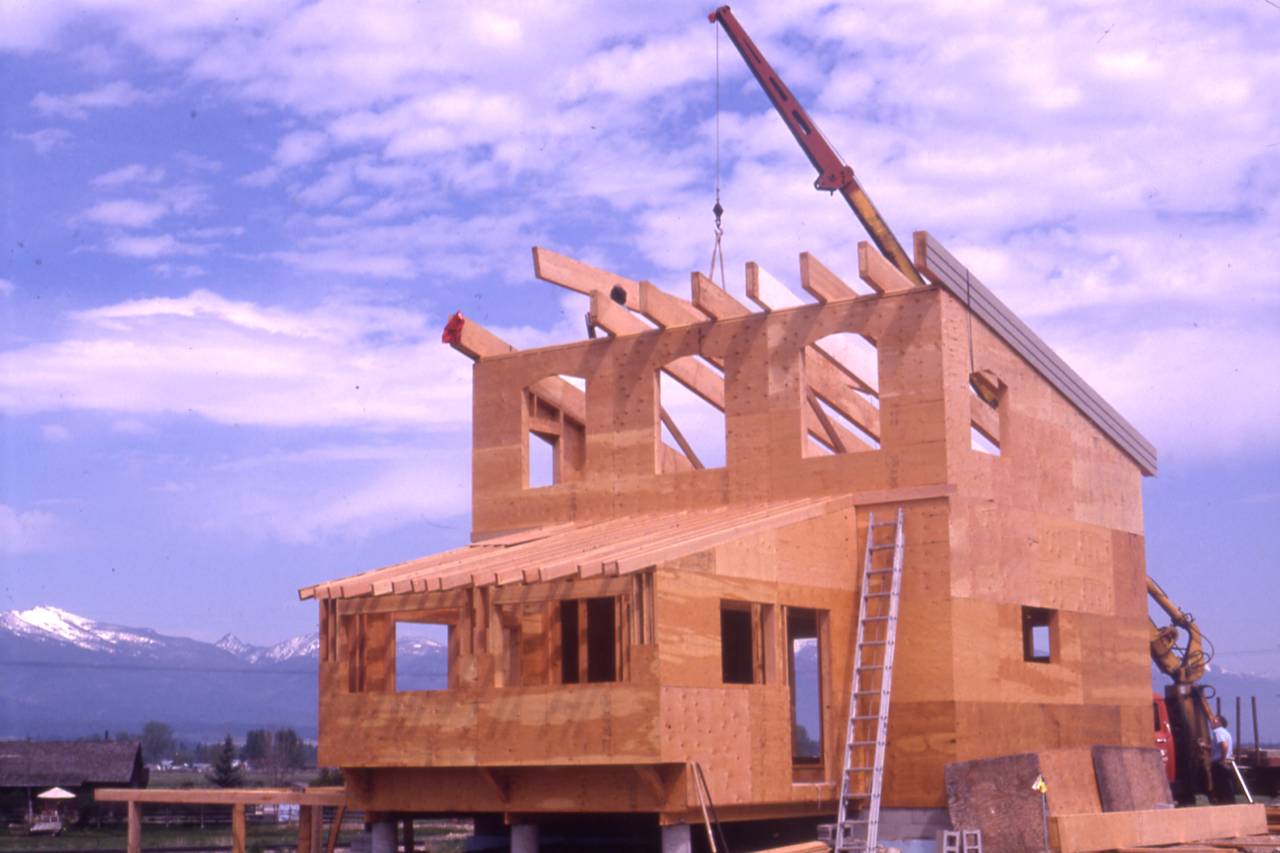 Originally published in Workbench magazine in 1994 as a do-it-yourself, owner built energy efficient home. The core module of the house is 20 x 24 feet providing a total 960 square feet in the two floors. This does not include the attached south facing sunroom, the roofed deck, the basement, or the north facing master bedroom which was added later.

The house is designed for amateur construction so you can save contractors and laborers fees by doing all or part of the house yourself. The simple rectangular shape of the core module is easy to understand and build. The pitch or slope of the roof is gentle enough so it can be constructed without special scaffoldings or ropes, and also yields more usable interior space than a steeper pitch. The optional sunroom is supported by cement piers which are quickly installed using waxed cardboard tube forms available at building-supply centers. The piers were set and poured in place in less than half a day. Roof beams and floor joists were owner-built on-site in two days with 4 x 8 sheets of plywood and 2 x 4's. Beams over 24 feet long can be lifted by two workers, and were filled with insulation, primed and painted before being placed in the house.

The Plywood House was designed around a central "core" module, into which all necessary utilities could be installed. Bedrooms, garages, sunrooms, studios and other spaces can be added to the core as time and funds allow, which keeps initial expenses to a minimum yet provided comfortable living space while finishing the house. Living in the core module also gives the builders time to consider how best to accomplish each addition.

We built the prototype version of this house for ourselves and lived in it for two years. One of the best decisions we made was to include an earth-sheltered basement. Insulated basements provide very usable space at a stable year-around temperature. When it was -25 degrees outside during a long Montana winter, the basement stayed at 50 to 51 degrees, and when it was over 100 degrees outside the basement was still a very pleasant 51 degrees. The sunroom and solar gain of the south facing house plus energy efficient construction made it possible to heat the entire house with a small Jotul stove in the master bedroom, using fans to move warm air through the house.

In 1994 it cost $20,000 to construct a watertight, 960 square foot shell with double pane windows, doors and basic electrical and plumbing installed. This figure does not include appliances or furniture. The average cost to finish the house; siding, hardwood and tile floors, painted walls, bath and kitchen fixtures ran an additional $20,000, but that figure can be higher or lower depending on personal choices. Adding a full basement provided 480 square feet of extra space, and cost $1070, which included extra hollow blocks and 8 yards of cement for the poured reinforced slab.

Paul... the kid and 1 of his buddies from school helped me build all the floor joists for the house in 2 afternoons but now I'm renting a small nail gun and borrowing my neighbors little air compressor. I got tennis elbow from hammer nailing but the nail gun shoots nails as fast as I can reload it. The kids and I can lift these lightweight beams pretty easy so I'm rigging some ropes and we'll set the roof beams ourselves. Soon as we get those top beams set in place I can nail on the plywood and some roofing paper and it'll be watertight which will make it a lot easier to work this fall here in Minnesota. Then I'll sheathe the walls and we'll fire up the little stove and celebrate. Maury Conant

... we won't be able to add on the master bedroom and garage for awhile but all the utilities are in and we're comfortable, and the only mortgage we have is on the 5 acres and it's still less than the rent we were paying. Melissa McClain

... we can build on lots as narrow as 25 feet in this development and if I reduce the width of the main module a couple feet I will have plenty of room for a nice walkway on each side. Looks simple and straightforward and I think I can make the necessary changes myself and pass inspection. After my buddy and I finish the hollow block foundation I'm doing all the framing myself during my upcoming vacation, and I hope to have the roof on and be watertight a month later. Lee Westbrook. Morristown

... it'll be a race to see if I can get that second bedroom added on before the kid arrives. You sure you still want pictures? Jimbo Stafford

Paul... I really hate messing with this fiberglass insulation but I will admit theres something satisfying about stuffing these beams and joists full of insulation and nailing them closed. And its even easier after I checked out the prices on solid timber beams at the lumberyard. Robert Hickey

... the southeast facing sunroom is our favorite place in the house and a cool spot to sip coffee watching the sunrise. Like I told you earlier I enlarged the windows to let in more light and doubled the insulation in the roof. This winter I'll try pots of cherry tomatos against the windows. Rebecca. Maine

Paul... the basement is awesome. I put the pool table down there and the kids ping-pong table. All that insulation is paying me back now. We call this vertical housingâ¦three stories on a small lot. Edward Bennis 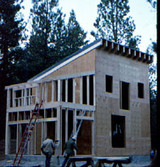