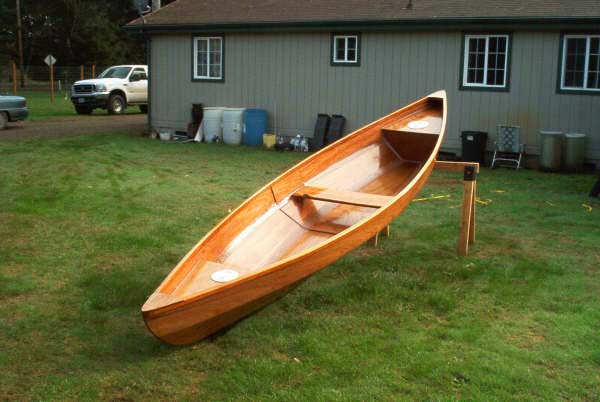 Last year I ordered the plans for the Pacific Gun Dory. After gathering all the nessesities it took me about 6 weeks to build. Real time working on the boat was a lot less. The boat is a dream to row. With a gps I can row to 6 mph, Can hold 4.5 mph for hours after a little getting in shape. The only thing I have found faster is a rowing shell.

I want to build another boat and have looked at many plans and have found nothing that has the beautiful lines of the Pacific Gun Dory. The double chine sets it in a class of its own. So I need to build another one. In the plans I purchased it stated these were for one boat. Since I want to build another I need to know whats necessary for the okay. Everywhere I take this boat I get attention and compliments. Even at the Toledo Oregon boat show it was a hit. The epoxy work was quite an experience. I learned a lot, with the knowledge gained I could build one in half the time and do a better job on the finish.

I was a little apprehensive about taking another person in the boat. Thinking it might not trim as well and affect the rowing. It makes almost no difference with a combined weight of 370 lbs. It still does 6 mph on the top and rows nearly as easy. It tracks perfectly and holds well in a wind. Look forward to hearing from you. Thank you---

Thank you for your response. I've drifted the Siletz river and have taken the gun dory thru moderate rapids with no problem.

Just puts a smile on my face when ever I test it a little. It's so responsive I can stop right in a good riffle and hold or manuver away from bad spots. Next year I want to take it out of Depoe Bay or Newport and do some bottom fishing which should be fun. I have 2 other boats and I fish the ocean quite a bit for tuna and salmon.

I used yew wood for the gunwales, skeg and seat. The epoxy didn't really like the yew as an adhesive, maybe too much oil or too dense but it's tough and looks nice. But all in all it was a very enjoyable experience. Thank you again. 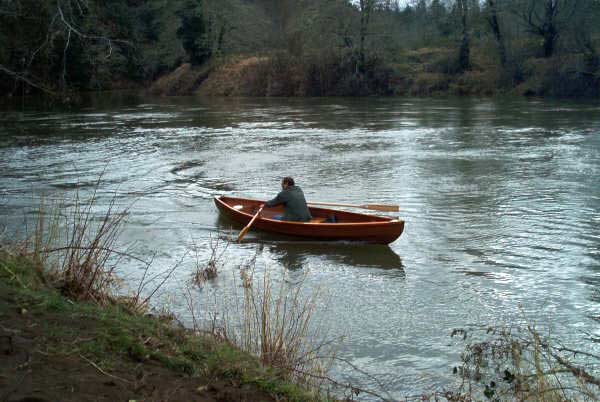